bp2008 said:
It does apply. Currently a reverse proxy is the only way to use HTTPS with Blue Iris. That can be changed, but there will always be the nuisance of certificates.
Click to expand...

Brilliant - I will download and test now. Are there any particular benefits from a users point of view? Stability?

MikeLud1 said:
I just left a comment. Also I just loaded V181 and do not see WebCodecs in the dropdown.
View attachment 105791
Click to expand...

Are you using HTTPS to connect? It also needs to be a supported browser.

hikky_b said:
Brilliant - I will download and test now. Are there any particular benefits from a users point of view? Stability?
Click to expand...

Its efficiency is on par with other hardware accelerated video players. The thing that differentiates it is slightly lower latency (less video delay) because UI3 is allowed to precisely control the frame timing. The next best player is HTML5, where latency of 3 to 5 frames is pretty common. That still isn't bad for our purposes, but it can be better, and that is where WebCodecs is most beneficial to a user. Lower latency means slightly less loading time when switching streams, which includes seeking in clips.

(speaking of clips, I notice the WebCodecs player isn't handling clip playback quite right; I'll fix that for UI3-182)

Currently I have only tested WebCodecs on three machines. One of them was a virtual machine in a system without a real GPU, and the WebCodecs player performed very badly in that VM even though the HTML5 player was fine. This is something I would expect to be ironed out as more and more developers begin using it and reporting bugs.

The HTML5 player is not really unstable (it is super rare for it to actually crash outright), but it does have a few glitches which I have not seen with other players, noted in the Notes section above.

Just tested this with Microsoft Edge and it's working great: 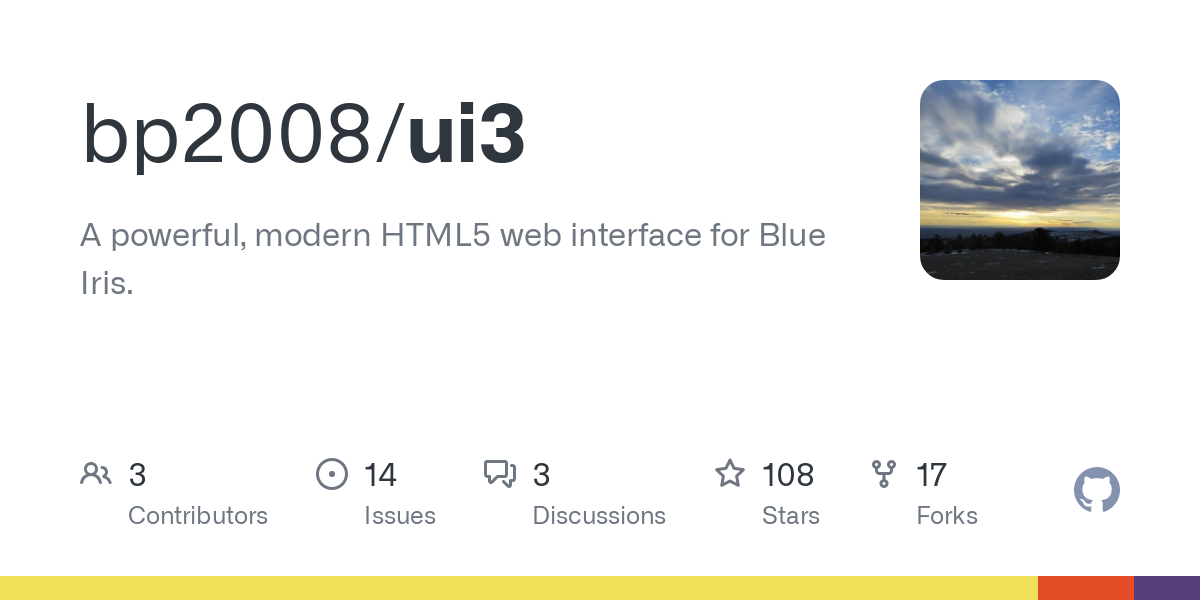 bp2008 said:
Are you using HTTPS to connect? It also needs to be a supported browser.
Click to expand...

I am not, my mistake I thought it will work without HTTPS

MikeLud1 said:
I am not, my mistake I thought it will work without HTTPS
Click to expand...

Nope, that is the whole point of the issue I linked on github earlier. To get the Chrome developers to reconsider allowing WebCodecs to be used without HTTPS hosting, because it is impractical for applications exactly like Blue Iris.

The problem is that HTTPS is difficult to set up properly so that you don't get browser warnings when you connect. If Blue Iris were to switch to HTTPS hosting by default, then suddenly almost all users would have to click through a warning page from their web browser in order to load UI3. This would be confusing for most users, who do not understand technology enough to even know where the warning came from, let alone why it is there.

Quick update question. How often do people apply BI Updates? I have BI updates coming to my inbox through the forum but it seems there's a new update almost everyday. I always thought the mindset on here was if it ain't broke don't fix it. Does eveyone do daily updates?

CCTVCam said:
Quick update question. How often do people apply BI Updates? I have BI updates coming to my inbox through the forum but it seems there's a new update almost everyday. I always thought the mindset on here was if it ain't broke don't fix it. Does eveyone do daily updates?
Click to expand...

I only run his stable version. I think the last stable is from August. I never run his latest version as they are riddled with bugs.

I've gone both ways, latest stable version and updated every time. I usually update to the latest version regularly but have had to roll back if there's a problem. Given it's a point and click operation, with maybe a reboot, it's not a big deal to me to be on the bleeding edge.

I keep one machine on the bleeding edge, mainly so I can provide feedback if needed and keep UI3 running properly. But I manage other machines too which I update much less often.

Lately, I stick with the current stable version. Too many issue's with bleeding edge release's.

It's easy to roll back though when things go sideways.

Yep, but I've still gotten a little lazy lately and have been sticking with 5.5.1.2

Is anyone else seeing... where you hover over the alerts on the left... some cameras show the gif of the video at normal size... but then others are like full screen... This is a recent issue.. Even on the same camera... sometimes you hover over and the gifs are normal size (the normal size since i can remember on ui3) and then later other clips will be like 3/4s of the screen... I cannot figure it out.

Yes, I've noticed that in UI3 but it's the same on the console so UI3 is displaying whatever BI sends it.

@mrfrankmrfrank @sebastiantombs That is an recent change in UI3.

It was done because deepstack can make annotations on a high-res JPEG file associated with the alert. Things like drawing a box around an object and labeling it "person 96%" or whatever. At the small size, these annotations were not typically legible. So now when Blue Iris indicates it has a Hi-res JPEG file associated with an alert, UI3 will load that at full resolution instead of the smaller thumbnail when you mouse over the alert. This is configured in Blue Iris Camera Properties > Trigger. But perhaps deepstack integration can also cause these images to be created? I've never actually used deepstack.

There are also some new settings related to the preview animation, including the ability to turn off the animation when a high resolution JPEG is found (in order to actually give the user time to read deepstack's annotations).