Flying insect at night...wth is it? We live in North Florida...

anyone ever seen one of these insects. For the life of me I cant figure out what it is... is stick like with what looks to be several small wings? heres a screen cap...will post vid but you have to zoom in order to see it...

Maybe a Walking Stick or similar. 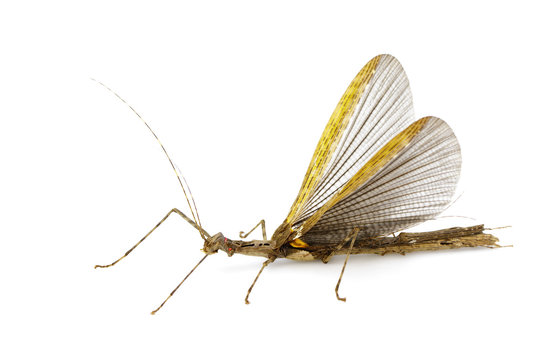 Mike A. said:
Maybe a Walking Stick or similar.

I've never seen anything like that here... I know the pic and vid might not be able to really show what it looks like but the wings or what I thought were wings looked much different

Many insects mate in flight....maybe that's what is appearing and the diminished light at night doesn't reveal more detail.

I don't think what you're seeing are wings. I believe what look kind of like 3 independent sets of wings are legs folded in and other body structure. Probably not seeing the actual wings being in motion and mostly transparent. What is seen wouldn't be as well if they were in motion. There are no insects with 3 separately located independent sets of wings as it kind of appears (as far as I know anyway, biology background in a past life). Don't know that it's that specifically but something similar in body structure. Lots of different varieties, shapes, and sizes and found in the Southeast US. Could even be something like a praying mantis but their wings are more substantial with outer layers so I'd think that you'd see more indication of them even moving quickly.

You have your cam well tuned btw. Not much blur on that even though moving pretty quick. Just not close enough and in frame long enough to get a very good look. If you slow the video way down you can kind of see what look more like legs folded in at some points.

ETA: Probably going to stay in the same general area so keep watching and you may get another shot at it. I have one crazy looking insect that comes to one of mine almost every night lately.
Last edited: Aug 14, 2022

I thought maybe that too at first but watching closer slowed down I don't think so. At a few points (e.g., at the top of the arc before disappearing) you can see the legs take different relative angles/positions and at the tail-end the body is turned upward a little as is typical for such things.

It is a rod. I heard it on late night conspiracy radio, am band.

Are you sure that is not a drone with someone spying on you?

fergenheimer said:
It is a rod. I heard it on late night conspiracy radio, am band.
Click to expand...

fergenheimer said:
It is a rod. I heard it on late night conspiracy radio, am band.
Click to expand...